The most beautiful of all the summer residences

The Summer Palace of the Elector

The palace, built from a hunting lodge, has been freshly renovated and restored and now presents itself as it did when it was furnished in the time of the Elector Carl Theodor in the 1760s and 1770s – full of affectionate and unusual details. The Gallery of the Ladies of the Court is famous: 26 portraits of distinguished ladies-in-waiting in the court of the Electress Elisabeth Augusta. On the third floor, rare paper-backed wallpapers dating to ca. 1800 have been preserved. They depict impressive views of Swiss landscapes and decorated the suite of the Margravin Hochberg, the second wife of Margrave Carl Friedrich von Baden.

The Palace Garden is a green paradise. It owes its creation in the form preserved today to the Elector Carl Theodor von der Pfalz, an educated ruler who was interested in the arts. Experts consider the garden as one of the absolute masterpieces of European garden art, its combination of geometric French-style garden sections and a landscape garden in the English style being unique. The famous circular garden parterre, bordered by the curve of the Zirkelgebäude (buildings set in a semi-circle) and arcades, was created in 1753 on a strictly symmetrical basis. There were also geometrical flower beds, elegant fountains and discreet hedge zones.

A garden full of surprises

The Bath House, a small outbuilding of great elegance, is famous. This is where the Elector received his guests – as a private individual, for conversations or for playing music together. The magnificent Schwetzingen Palace Garden Mosque (an exotic fashion in the 18th century) is a precious rarity. Today it is the only one of its kind in Europe still preserved. The princely ruler showed himself to be up with the times. He sent his new garden architect Friedrich Ludwig von Sckell to be trained in England by the “trendsetters” of garden art. And thus one of the first English landscape gardens in Germany was created in Schwetzingen.

Culture in the palace gardens

Schwetzingen Palace and Gardens – this was always a place where the arts flourished. In the 18th century, it was famous as the “Court of the Muses” – the quality of the royal court’s music was the talk of all Europe. Mozart was fervent in his praise of it each time he visited Schwetzingen. Today the Palace and Gardens are still the venue for festivities and concerts, such as the summer “Lichterfest” (Festival of Lights), which attracts thousands of visitors to the gardens. The area of Schwetzingen, the flat Rhine valley, is now famous for its excellent asparagus: the exquisite vegetable was first cultivated in the 18th century in the Schwetzingen Palace Gardens. 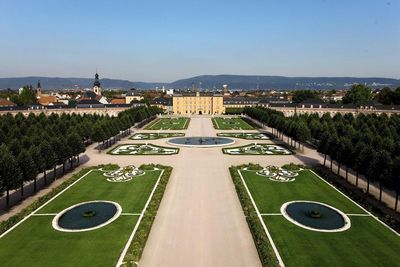